Follow Up: How I Can Tell If You Have A Little Dick

My last blog post (How I Can Tell If You Have A Little Dick) received a lot of attention! As it turns out; men with tiny appendages between their le 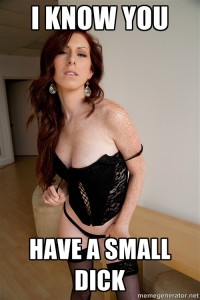 gs were either scared that their secret was out or were turned on that I could tell!

I kept some notes from a few callers and a few emails/blog comments and I can’t wait to share them with you! Now, I don’t normally write too many details about specific calls but I did ask each of you during our session if it would be ok for me to use you in this follow up piece. If you don’t remember that and you feel that I’m talking about you and you’re not happy about it; just email me and I’ll make it all better.

The first comment was from Mike; he wanted to let me know that he always kindof knew that women could tell but he finds it extremely humbling and frightening! He said, “it’s like she has you.”. I think he’s afraid we might tell all the other girl’s about his tiny manhood because he would be so embarassed. Honestly Mike, we do have you.

Then I received an email and a call from someone named Little Dick. Oh what an appropriate name! It turns out he’s one of the guys I’ve been calling a

What’s a pseudo alpha male? Well, Little Dick is a big guy physically, he’s a body builder that’s 6’2″ and 220 pounds. A blue eyed bouncer at a bar; most women would assume he would be an amazing stud in bed! Little do they know (giggle)…..he’s only got 5 inches – hard! He told me that reading my blog post made me want to ‘rub his bitch stick’!

Another pseudo alpha male is a regular around here – we’ll call him ‘d’. For my fellow small cock phone sex Mistresses; he’s the one that sings a little song for us while wearing panties on cam! He gets on cam and before he pans the camera down; I always get a little excited! He has a strong upper body with large biceps and tattoos. YUM! But, his little pee pee is only about 2 inches long (that’s probably being generous!). He shared something with me; he thinks that guys with a small penis are more ‘sex crazed’ meaning they talk about sex a lot and go on and on about it. Whereas guys with big dicks don’t talk about it as much; in my opinion that’s because they don’t have to flaunt it! They’re sexually satisfied….and so are their women!

These are just a few of the responses I’ve received so far. I would LOVE to hear more! Just leave a comment right here on my blog for the best results (and for it to be seen by the most people!) or call me anytime to talk about your shortcomings.