A Pink Ribbon Will Remind You 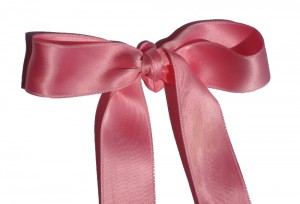 I’ve been training a new service submissive named Glenn for the last few weeks. So far, we’ve had four sessions together. A session means he comes over to my home and completes a list of tasks/chores/errands I have written out for him. This usually takes about two hours each time.

Now, I don’t like a ‘do me’ sub. What’s a ‘do me’ sub you might ask? It’s someone that expects something in return for their service. In my opinion; the privilege of being allowed to serve me should be compensation enough. However, in the past, I’ve literally had men ask if they could get a blow job for cleaning my bathroom! Please! Like THAT would ever happen!

So, Glenn isn’t like that. He is truly receiving pleasure from servicing me and we have gradually included a bit of D/s play during and after our sessions. This has included having him dress in panties and camisoles for me while he cleans, to bending him over and giving him a spanking to remind him not to ever ring my doorbell (in case I’m on a call), to  having him wear a pretty pink apron while doing the dishes. His lack of  trying to ‘top from the bottom’ only makes me want to top him more!

I plan to surprise him.

Tomorrow though, I have something special planned. It’s a simple, pink ribbon. He’ll be arriving at 1PM to receive his list of chores. The first on the list is to take my car for an oil change and to get me an iced coffee, then to come back and complete some other tasks while waiting for the car to be done. After he reads through the list and gets any answers and information he might need; I plan to surprise him with the Pink Ribbon. I’ve instructed him to wear panties under his clothes and before he leaves; I’m going to invite him into my play area and drop his pants, pull his penis out for me to inspect. Then, I’ll pull the pink ribbon out of my cleavage and tie it in a pretty  blow around his cock and balls. I’ll have him pull his pants back up and zip tight; leaving the pink ribbon dangling out of the zipper! Everyone will know he’s my panty boy.

Run errands with your ribbon out!

He’ll be expected to go out and run those errands with the pink ribbon sticking out –  on display – reminding him that I own him and that he belongs to me; tiny penis and all!

I will also be sending him home with the pink ribbon in place. Leaving him wanting me to tug on it all week long! I forsee lots of orgasm denial games in his future!

Would you like to wear a pink ribbon for me?