I thought I’d share a real life story with my blog readers this week!

Recently, The Scarlet Mistress attended a kinky play party. I must say I looked amazing in my black dress with a very low v-neck, a leather waist cincher, and my favorite leather Vera Wang heels. Plenty of submissive men and boys came to me asking if I would play with them. I refused all of them……………………until I got bored! 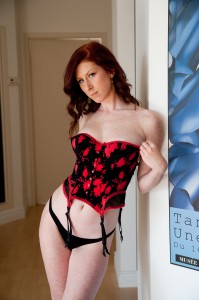 I Am Your Mistress

David approached me with his head hung low, eyes to the floor. He stood before me and asked if he could address me. I said he could and he asked if I would show him what it felt like to be in bondage. Being as bored as I was at that moment, I told him to fetch me two sets of 25 foot rope from the Master of the house, to return, disrobe, and present the rope to me. He did exactly as instructed. He stood before me and was very proud of his tiny little cock and his teeny tiny little ping pong balls underneath! I just laughed and looked him in the eyes – he just smiled; so proud! I began to put him into bondage while standing up.

I had him put his hands to his sides and created a chest harness out of the rope; then wrapping the rope around his upper arms and then above his elbows and across his chest. I pulled the ropes very tightly and then tied them off. I asked him if he felt that he could escape and he mistakenly said that yes, he thought he could! I shook my head from side to side and grabbed the other rope. I wrapped his left wrist with tope tightly and then brought the rope right between his legs; creating a slip knot right around his measly cock and tiny little balls! I then brought the rope over to his right wrist and tied it off there. I stood back and asked him if he thought he could escape now; he shook his head vigorously side to side and said noooooooo Mistress! Being so cocky before needed some punishment so I told him to clap his hands together for me. He quickly responded by trying to clap his hands together and in doing so tightened the knot around his cock and balls! I laughed out loud at the look of surprise on his face and told him to put his hands back down and then tied a little leash right at the base of his cock and balls. I grabbed the leash and pulled him behind me.

I paraded this pathetic little bound up man around the entire party. Stopping to say hello to everyone and allowing them to admire my work. Turning my new slave around and letting them smack his little ass cheeks and pat his teeny little balls. The Mistress of the house suggested I let him be our waitress for the night and I loved the idea!

We went into the kitchen and found a cute little pink apron and tied it on him. I re-named David – Denise! And said Denise, you’re to serve all of the people here at the party – anything they want; you are to do! She nodded her head up and down and I’m pretty sure I saw that little clitty pop up underneath that apron as I twirled her around, smacked her ass and told her to get to work!

You should’ve seen how hard Denise tried; she would climb up on top of a chair to get to the ice and to get into the refrigerator! She would carry the drinks in her tied up hands and deliver them to each person. Several times I saw her rewarded with some smacks and strokes to her nether-regions! She was a very good little waitress!

What a lucky girl Denise was all night long. I told her that if she did an excellent job; I might invite her to join me at the next party. Do you think Denise did a good job? Well, that’s a whole other story!