Stripped At The Security Check Point! Part 2 of 3

Read or listen to Part 1 Here.

This blog post has been recorded for your listening enjoyment: Listen Here

TSA Agent Scarlet was sitting behind a large desk. She had crossed her legs and propped her feet up. He couldn’t keep his eyes from wandering up and down those long legs; they were mesmerizing! He didn’t even care that his wrists were cuffed in front of him as he sat in the hard metal chair. This was a welcome detour. Was she smirking at him? 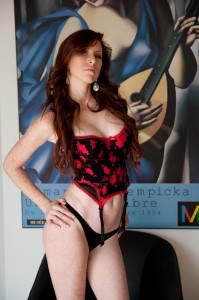 His passport and boarding pass were sitting on the table along with his carry on bag. Scarlet was just sitting there. Staring at him. Staring through him. She suddenly stood up and walked around to his side of the desk. She took a key from her belt and bent over to unlock his handcuffs. He closed his eyes as her perfume hit his nose. Breathing her in, he opened his eyes just in time to see the black lace of her bra as her fitted blouse puckered open at the tightening of her breasts. As if she somehow knew that he would take advantage of this opportunity, she grabbed both of his wrists and firmly sat them on the arms of the chair. He kept them there as she backed up and propped her shapely behind against the desk and stretched her legs out in front of her.”Stand up. I’m going to need you to remove your clothing. Including your under garments. The faster you do this, the faster I can get you to your gate.”, she said quite casually.

He hesitated, knowing that he would be utterly humiliated if he had to disrobe in front of this beautiful woman. He looked around nervously and cleared his throat repeatedly. Failing to even make a move to follow her instructions, he timidly looked in her direction. He couldn’t make eye contact with her. She was looking down at him and slowly reaching behind her to pick something up. “I do believe I’ve been very nice to you. Most passengers don’t have the opportunity to be in a private room for their security screening. Now I’m going to tell you One. More. Time. Take off your clothes. Now.”, she said with authority as she brought a polaroid camera around to rest against her thigh.

He gulped hard. He broke out into a nervous sweat. His penis reacted by jumping up in his pants; it was as if she were cockteasing him. He began to fumble with his shirt. Pulling it up over his head. Scarlet was watching every movement. Watching and waiting with the camera ready. He kicked his shoes off and bent down to remove his socks. Now it was time to take off his pants. He couldn’t buy any more time. He had to do it. He stood up and unbuckled his belt and slipped his pants down; tossed them aside. He looked up at Scarlet with his eyes pleading. She gave him a smirk and pointed towards his crotch with ared tipped finger. Wiggling her finger she said, “Come on. Show me. Take it all off.” Her voice dominated him.

He followed her instruction reluctantly. Slipping his fingers into his waistband he slipped off his boxers and bent forward. Time slowed down as he straightened his back and stood up. He was naked and humiliated. The bright flash of the camera brought him back to reality as he heard the polaroid slip out and felt her waving the photo in the air. She expertly slipped the cuffs back around his wrists before he even knew what was happening. But instead of sitting him back down in the chair, she attached the cuffs to a chain that was dangling down from the ceiling. As she walked back to the desk, he watched as she turned to look at him as she dangled the handcuff key over the garbage can…………And dropped it.